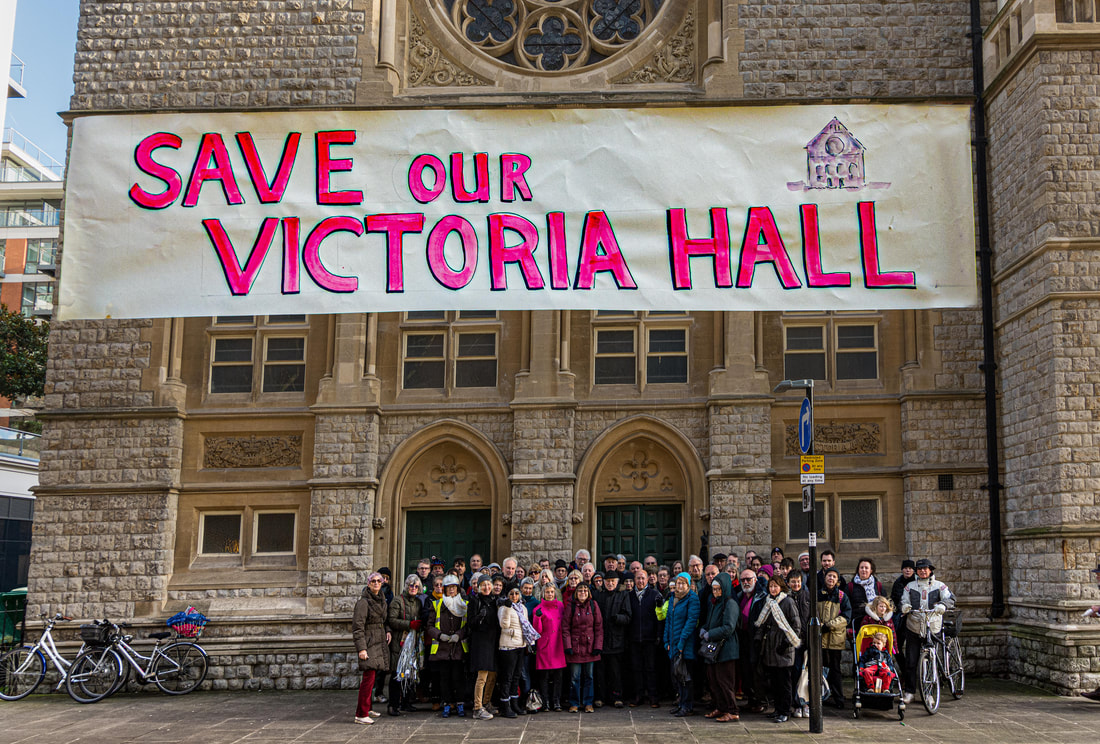 The Victoria Hall, central Ealing’s largest indoor community space,  is in danger of falling under private control and lost to the community.

Before you read on, support our fight to save the Victoria Hall for the community, by donating to our appeal:
https://www.crowdjustice.com/case/save-the-victoria-hall/

​A group of local community organisations has joined together to form the Friends of the Victoria Hall (FoVH), a not-for-profit voluntary body (HMRC charity reference number is ZD04507) whose aim is to stop Ealing Council ‘gifting’ Victoria Hall to a hotel company and to campaign to save the building for the community as a performing arts, exhibition and meeting space.

The Victoria Hall is the large public hall built in 1888 next to Ealing Town Hall with money raised by public subscription. Below it is a second space known as the Prince's Hall. The halls are owned by the Victoria Hall Trust, formed in 1893 to ensure that they would be run for the benefit of the local community.

Ealing Council wants to dispose of the halls to a hotel developer on a 250-year lease so that they can become part of a luxury hotel.

There are much better ideas for the building than this, as can be seen from the video made by the Campaign for an Ealing Performance and Arts Centre (CEPAC) showing what how the 19th century Hall could easily be adapted to serve the 21st century residents of Ealing: https://vimeo.com/457474916

Under the Ealing Council hotel scheme, use of a cut-down Victoria Hall would be available to community groups only on a restricted basis, with price increases controlled for the first 10 of the 250 years. And the conversion into a hotel would render the Hall unusable for the large community events that have taken place there for more than a century.

With the borough’s increasingly diverse population due to grow by 25% over the next 10 years, the Trust’s role is as necessary as it has ever been. Loss of the Victoria Hall and its ancillary rooms as places for meetings and gatherings would deprive the Borough of Ealing of a key facility that should be bringing together Ealing’s new residents and helping them to integrate with the existing community.

The provisions of the 1893 Victoria Hall Trust do not allow the Council to dispose of the halls, so Ealing Council has had to apply to the Charity Commission to change the rules so that it can take control of the Trust’s property.

In December 2019, the Charity Commission published the draft of a ‘Scheme’ that would clear the way for this to happen, subject to the result of the public consultation that ended on 7 January 2020. We challenged the first version of this Scheme with a devastating 40-page legal critique  of its numerous flaws.

Following the consultation, in April 2020 the Commission published a Review of of the the draft Scheme and called for the Council to make a large number of changes. Its response - highly unsatisfactory in our view - was submitted on 24 November 2020.

Shortly afterwards, FoVH wrote to the Commission to express our concern that not only does the Council propose to ignore most of the recommendations of the April  Review, but its response contains some significant errors of fact.  We pointed out that the extent and value of the Trust property had been understated and we noted that many local groups would be priced out of the halls that were built for their benefit.

On 22 March 2021 the Charity Commission published what it ruled would be the final draft of the Scheme for the Victoria Hall Trust.

The most series things wrong with this are:
​
On 23 April 2021 two local residents on behalf of the Friends of the Victoria Hall lodged an court appeal against the draft Scheme with the Charity Tribunal. The first hearing of the case occurred on 10 May 2022. The main court proceedings are scheduled to start, online, on 28 September 2022.

The proceedings will be open to the public but you need to apply by 19 September 2022 for permission to log in. To do so, email grc@Justice.gov.uk before that deadline, providing your name, address and the reason for your interest. ‘Concerned local Council Tax Payer’, ‘Long Time User of the Victoria Hall’ etc. should suffice to cover the final point.

We say: it's our Victoria Hall, not the Council's, so don't let this happen!

We're supporting legal action at the Charity Tribunal to prevent it.

Show your support by making a donation towards our legal fees:
https://www.crowdjustice.com/case/save-the-victoria-hall/

Stay informed by signing up to receive our email news: https://mailchi.mp/c14d009a6ffe/vhfriends

Other videos about the Hall are listed here.

And our campaign has been making the news. Take a look!