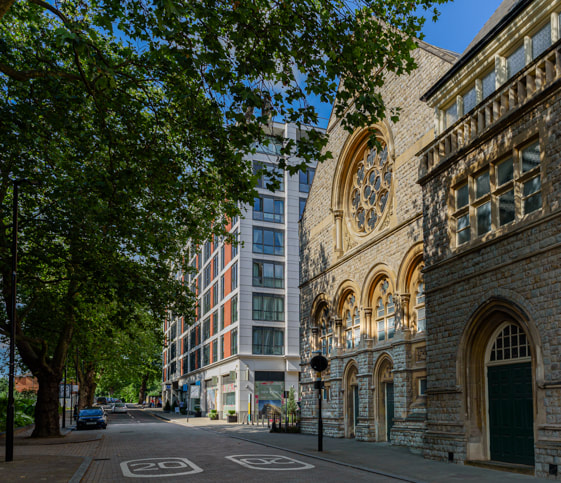 Here are some of the  key dates in the 135-year history of the Victoria Hall, which is at risk of becoming part of a luxury hotel instead of a community resource.

For more than a century and a half the Hall has been at the centre of community life in Ealing, easily accessible from all parts of the Borough and hosting art exhibitions, balls, discos, blood donation drives, vaccination campaigns, ballroom, ballet, swing and Ceroc dance classes, amateur dramatics, graduation ceremonies, examinations, classical, rock, folk, jazz, roots and ethnic music concerts, weddings, exhibitions, multicultural celebrations such as Durga Puja, Divali and Christmas, film societies, NHS cardiac rehabilitation and anti-smoking classes, public enquiries, inquests, election hustings, election counts, protest meetings and many other types of event. Support our campaign to keep this going by making a donation here.


​25 January 1887
A public meeting is held to discuss how Ealing should mark the Golden Jubilee of Queen Victoria. It was agreed a public hall should be built, paid for by public subscription. A sum of £2,000 was already pledged, the equivalent of £270,000 today.

The original design was for a high main hall at first floor level – what’s now known as the Victoria Hall –  with smaller rooms at ground and basement level beneath, now known as the Prince’s Hall or Prince’s Rooms.  The design allowed for the installation of an organ at the east end with a rose window visible behind it.
The structure stood attached to but separate from the main Town Hall apart from the first floor entrance to the Victoria Hall, which was accessed by a staircase through the main building. The Princes Halls below had their own entrance to the west, from Longfield Avenue and the two buildings shared a common service staircase at the southwest corner.

15 December 1888
Edward, Prince of Wales attends the official opening of the Victoria Hall.

6 November 1893
The Victoria Hall Trust is set up to take ownership of the halls. The trust deed declares that the Hall was to be made available for hire for "Meetings, Entertainments, Balls, Bazaars, and other Gatherings Whether Social or Political…”. The Declaration further specifies that any rental income generated, after deductions for the upkeep of the Hall, must be applied “as the Trustees may think fit between and among any Charitable or Philanthropic or Charitable Institutions in the District of Ealing Local Board as the Trustees may think fit…”

27 February 1897
A Trustee meeting decides to fund the purchase of an organ and the construction of a covered way over the Longfield Avenue entrance. Stairs from here led up to the Victoria Hall, and to a platform at the west end of the Hall.

17 May 1899
Following the construction of the covered way in Longfield Avenue the Trust Committee decides upon the first of a series of enlargements to the Hall. The discussion resulted in an extension on the north side the whole length of the building, giving a lounge, smoking rooms and buffet, along with an additional dressing room.

17 March 1902
The Trustees approved expansion of the Princes Room, making space for an extra cloak or store room at the west end, with an extension of the lower floor lounge to include a smoking room, buffet, toilets and caterers’ room. The whole new area was ready for hire in 1904.

25 June 1958
The Charity Commission writes to Ealing Town Clerk to say that the Council cannot keep the £450 it raised the previous year from the sale of the Victoria Hall organ because the instrument is not the property of the Council – just like the Hall itself –  and so it must distribute the money to local charities, as called for in the 6 November 1893 Declaration of Trust.

21 October 2014
It is decided at an Ealing Council Cabinet meeting to market the opportunity to refurbish and redevelop Ealing Town Hall. The Victoria Hall and Prince’s Room beneath it account for over 20% of the Town Hall site.

12 July 2016
An Ealing Council Cabinet meeting approves the granting of a 250-year lease to Mastcraft to turn most of the Town Hall and Victoria Hall into a "luxury" hotel, with part of the building retained for municipal use. They would be leased for 250 years to Mastcraft for a payment of £2,500,551 and an annual rent of £250,000.

4 August 2016
The Council Scrutiny Committee is asked to approve the selection and appointment of Mastcraft. There is some discussion about whether or not the Victoria Hall Trust exists, but there is nothing recorded in the minutes of the meeting, which approves the selection of Mastcraft and "thanks the officers for their hard work to date."

19 September 2016
A member of the public present at the Scrutiny Committee meeting writes to the Committee clerk to express her concern that the discussion about the Trust was not minuted, and that there had not been any effort made to ascertain whether or not the Trust had been wound up.

26 May 2017
Having been prompted by this enquiry, Ealing Council discovers not only that the Victoria Hall Trust is still extant but that it owns at least 20% of the Town Hall building it had sold the previous year to its development partner so on 26 May a law firm acting on behalf of the Council applies to the Charity Commission for permission to vary the Trust Deed to allow disposal of both parts of the Victoria Halls. The Charity Commission instructs the Council to organise a consultation process with stakeholders. This ran from November 2017 to February 2018 and over 275 representations were received. The overwhelming majority opposed the sale of the Hall to be part of a luxury hotel.

6 June 2018
London Borough of Ealing and hotel developer Mastcraft sign an agreement under which Mastcraft will be paid  £420,000 if the Town Hall development can't happen. This was not revealed until 7 March 2019 when it was disclosed by the Director of Planning and Regeneration at a Cabinet scrutiny meeting

15 March 2018
First meeting of the General Purposes Committee in its role as the Trustee for the Victoria Hall. The meeting is told "There is some uncertainty about exactly what property is held by the Trust." That is a matter that has been left unresolved ever since.

15 January 2019
Mastcraft Ltd applies for planning permission (190182LBC) for "the partial demolition, conversion, alterations and extensions of Ealing Town Hall to provide a new hotel and retain community, publicly-available facilities and Democratic Services, with associated development." Campaigners point out that the partial demolition would would have a significant and detrimental effect on the space within the Victoria Hall.

27 November 2019
The Charity Commission publishes a draft 'Scheme' that would change the rules of the Victoria Hall Trust to allow Ealing Council to sell off Ealing Town Hall, including the Victoria Hall and Prince’s Room to the hotel developer.

Part of the Scheme was a ‘Community Use Protocol’ which purported to ensure that the beneficiaries of the Trust – the people of Ealing – would be able to use the Victoria Hall at affordable rates. However, these rates would not be available at weekends, and the very restrictive definition of what constitutes a local group would exclude many previous community users.
The publication of the draft Scheme prompts immediate criticism from campaigners and concern about the limited amount of time available in a consultation period that would run over the Christmas period. The deadline is subsequently extended to 7 January 2020.

7 April 2020
In response to the barrage of criticism in the consultation, the Charity Commission publishes a Review of the Scheme which refuses to allow the Council to dispose of the Victoria Hall on the terms the Council had proposed. The 13-page ruling agrees with many of the serious criticisms that FoVH and others made of the Council scheme in its submission to the consultation.

13 September 2020
The Campaign for and Ealing Performance and Arts Centre (CEPAC) publishes a video showing how the Victoria Hall could be updated and, if managed properly, serve the community well into the 21st century.

24 November 2020
As directed by the 30 July 2020 meeting of the General Purposes Committee, the Council sent its response to the Charity Commission April review.

17 December 2020
The Friends of the Victoria Hall write to the Charity Commission to deplore the Ealing Council response, noting
“Not only does it ignore most of your recommendations but it also contains some significant errors of fact. Consequently we believe that the draft Scheme for the Victoria Hall cannot be allowed to proceed and is likely to be challenged if it does. Furthermore, proceedings at the three Trustee meetings that have taken place since you issued your Review [in April 2020] have confirmed our strongly‐held view that the Trustees are conflicted because of their role as Ealing Councillors.”

28 January 2021
At a GPC meeting, a number of questions were raised about what had been presented as ‘draft’ 2019-20 accounts and an ‘update’ to the 2018-19 numbers.  These are the figures that are supposed to underpin the claim that the Trust is unsustainable and so unviable.  There were so many questions about the numbers and the assumptions that one of the independent trustees called for a thorough independent review of the accounts and it was agreed it should happen. Three meetings later it still hadn’t been done. ​

2 March 2021
​To take over from the General Purposes Committee and to try to address conflict-of interest issues, a meeting of Ealing Council sets up a new Victoria Hall Trust Committee comprising five Council Trustees and three independent co-opted Trustees. It has its first meeting on 26 May 2021.

22 March 2021
The Charity Commission publishes what it rules would be the final draft of a ‘Scheme’ for the Victoria Hall Trust which would allow the Council to sell its property. The new Scheme ignores most of the shortcomings of previous version, including many that had been identified in the Commission’s own detailed review in April 2020.

Among the many shortcomings of the "final" Scheme are:
23 April 2021
Two local residents on behalf of the Friends of the Victoria Hall lodged an court appeal against the draft Scheme with the Charity Tribunal, thus triggering a lengthy legal process.

1 October 2021 Ealing Council applies to the court to become party to the proceedings as 'second respondent', thus delaying the start of proceedings which had been expected to have taken place as early as September 2021.

10 May 2022
At a half-day ‘Case Management’ video hearing of  the Charity Tribunal, Judge Damien McMahon commented in his opening remarks that he was not happy with the ‘inordinate delay’ that there had been in dealing with the appeal and undertook to issue directions in around one week's time about when the longer, substantive proceedings would take place. At the beginning of July 2022 those directions were issued with an online hearing date set for 27 and 28 September 2022.

13 September 2022
There is a further delay when court officials cancel the substantive hearing set to start on 27 September and replace it with a ‘Case Management Hearing’ to resolve legal and procedural issues that have arisen.

27 September 2022
Following the Case Management Hearing it is expected that the substantive hearing will take place in November.

We say: Hands Off Our Hall! It's not the Council's, so don't let this happen!

Support our campaign by making a donation here.
​
Make sure you stay informed by signing up to receive our email news: https://mailchi.mp/c14d009a6ffe/vhfriends